The End of South Hall 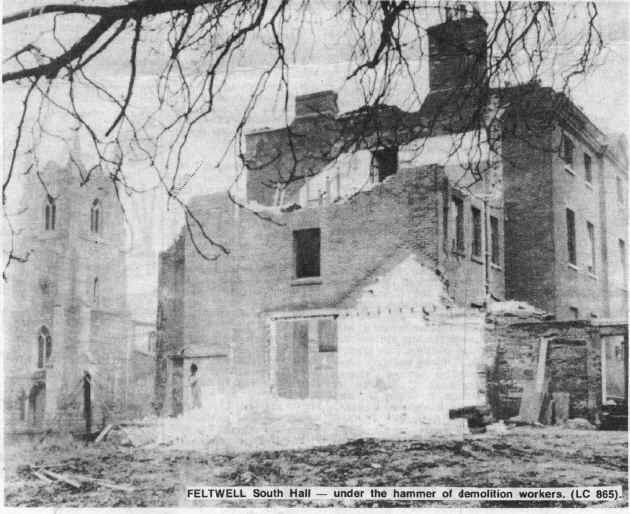 At the beginning of this month, the demolition of Feltwell South Hall started to make way for two dwellings.
Mr A. J. Orange, Chairman of Feltwell Historical Society and Mr P. Cooper, secretary, have researched into the history of this soon to disappear land mark.
There were originally seven manors in the extensive village of Feltwell, they tell us, and the hall was the major house of South Hall Manor.
Unfortunately, about 20 years ago, vast quantities of ancient documents, including record books, were consumed in a huge bonfire so that the history of the building itself is no longer available.

The hall appears to have been erected during the early years of the 19th century, immediately in front of the former hall, which was known by various names such as "Mott's House, "Wace's House" and " The Tiled House".
The west wing was added by 1909 to provide bathrooms and other rooms.
At the time of the Norman conquest the manor was owned by Alveva, a Saxon lady, and later passed into the hands of the Cokefields.  One of the Cokefield family married William de Bellow Camps (or Beauchamp) and about 1297 it passed to him.
By 1352 The Manor was in the hands of Sir John de Chyvereston and in 1374 it was purchased by Lady Elizabeth Lutterell, widow of Sir Andrew Lutterell.  During the 15th and 16th centuries it appears to have been let to the Motts and the Waces, but by 1564 it had passed to the Woodhouse family who were Lords of the Manor for about 200 years.

LORDS OF THE MANOR
(Article 6 in Clough Family Loop)

In 1730 it was purchased by Mr Richard Brewster, of Brandon and was let for about 40 years, before it came into the hands of the Clough family, who were also Lords of the chief manor.
When Miss Pleasance Clough died in 1851, she left South Hall Manor to her nephew, Edward Clough Newcome.  On the death of his son Edward Cyrill Newcome, whose widow continued to live in the Hall until her death in 1949, the lordship of the Manor passed to his nephew, Cyrill Henry Newcome Harding.
After the death at the age of 90 of Mrs Newcome, the hall was unoccupied until it was purchased by Weasenham Farms Company, who at one time used it as a hostel for displaced persons and later for farming students.  It was sold about two years ago to the present developers.  (End of the Clough Family Loop - Click to rejoin the tour)

Back to Written Records or Infoloops